Music didn’t play a big part in Mike Darby’s early life until 1977 when his brother Paul brought home a copy of “My Aim Is True” by Elvis Costello and then a week later “Never Mind The Bollocks” by The Sex Pistols. The spirit of the Punk era caused that Mike found some confidence and believed that anybody could be in a band. Thus he was committed to try his luck and his first effort was Mike and The Molemen. The latter was the stepping stone for Mike to have the confidence to approach better musicians with the aim of forming The Rimshots. With one of the later line-ups of this band, he supported The Beat at The Locarno in 1980 and got a singles deal with a new Bristol based label called Shoc Wave Records. After the split up of The Rimshots, Mike had two more attempts at fronting a band before he moved into management picking up his little brother Neil’s band Fear of Darkness. The latter led into Love Jungle which led into managing Rita Lynch. Nowadays Mike Darby is an independent financial advisor and label head of Bristol Archive Records.

Q: Greetings, Mike! Over the last few years, Bristol Archive Records has been unearthing some of the most crucial British Reggae to see the light of day. How did your concept and dedication start?

A: We released a compilation called The Bristol Punk Explosion 1977 -1983 approx two years ago. It didn’t sell very well but it mapped out the template for the extensive sleeve notes, hidden unreleased gems and the pictures. As soon as I saw the finished product I knew I had to pull a Reggae compilation together and I knew that the challenge would be to get Black Roots and Talisman together on the same record. I had a white pop reggae / ska band in 1980 and The Rimshots had supported both of these awesome roots bands, the problem was that they had only ever shared the same stage once and there was history between the two groups. I knew or thought I could get access to other reggae material by making contact with Gene Walsh who had run Shoc Wave Records in the 80′s and had released Joshua Moses and Sharon Benjamin so the challenge was on.

Q: Your label’s Reggae catalogue started out with “Bristol Reggae Explosion”; full of exciting songs from virtually unknown artists. Did you anticipate the huge amount of material that must have come across your desk? There was enough material for two more successful compilation albums.

A: We’ve released three successful compilations up until now actually and are currently working on Reggae Explosion 4 which will be the end of the 80′s and then Reggae Explosion 5 which will be the start of the 90′s. We had no idea how much material was in people’s houses, under beds, on cassettes, old quarter inch, limited edition vinyl. I was introduced to Martin Langford who compiles the records and writes the sleeve notes, Martins memory of all things Reggae is amazing and my skill has been in finding the artists and engaging them in the project. The quality of the unreleased material is astounding!

Q: The world now is familiar with the sheer brilliance of artists like Dan Ratchet and Joshua Moses , to name a few. Did these talents approach you?

A: No I approached Dan and then his producer Simba Rashe Tongogara. Both live in Bristol. Joshua, again living in Bristol was introduced via Gene Walsh who then introduced me to Joshua’s producer Mikey Taylor Hall. I had met Joshua once in the 80′s at a Domino game at Gene’s house, he didn’t remember but it made the approach easier as we had friends in common.

Q: Bristol has Reggae talent on par with London and Kingston and all points between; any more artists or groups coming out of the woodwork?

A: Wow thank you for saying that, the artists will be really happy. We are mixing a Vibes album at the moment, recorded in 1989 it features Popsy Curious, Winston Minnott from Cool Runnings and Veereal and was never mixed back in the day so was never released. Some killa tunes on here. We are awaiting the final delivery of a Restriction album, now this will be something special. Mikey Taylor Hall has given us unreleased material that he has produced which will appear on Reggae Explosion 4.

Q: Perhaps your greatest concept was to work with Black Roots and reissue some of their earlier works. How was it to work with these legends?

A: A privilege and a pleasure. Jabulani is a quiet man so it’s taken a while to build the relationship. Martin Langford came up with the concept of the Singles Anthology as he is a lifelong fan. We are releasing a Dub album of ‘On The Ground’ in the spring and will probably release on Vinyl only, a Limited Edition of Black Roots first ever album with additional sleeve notes.

Q: There have been some incredible album launch concerts within the last year. Is there a chance of some international appearances?

A: Now that is interesting. Black Roots, Talisman and Joshua Moses all have the same agent and all are back out playing live and have made big British festival appearances this summer. All three have new albums either just released or ready for the spring release. All three would love the opportunity to tour in Europe, just ask a promoter to approach us. I’d also like to take The Bristol Reggae Explosion Live show out on the road. We played a monumental gig this summer with nine of the featured singers on the compilation albums all singing their track from the records. Talisman acted as the backing band and played a set in their own right – it was brilliant.

Q: It’s fantastic news that the Fashion catalogue is going to be reissued by your sister label. Are you going to be involved in this project?

A: I set the deal up with Chris Lane but it’s Martin Langford’s baby to put the track listings together. We are hoping for two new compilations in the spring. Fashion In Fine Style Significant Hits Vol 1 is out now.

Q: Your resident “minister of information” Martin Langford is a plethora of knowledge. How did he come on board Bristol Archive Records?

A: I was introduced by a DJ and Vinyl collector John Stapleton. We met in the record shop Martin works in on a Saturday. I told Martin about my plans for the Bristol Reggae Explosion Vol 1 and he just threw a few names at me that I either wasn’t aware of or hadn’t considered. It was obvious from that moment that we should team up and we haven’t looked back since. We both have very different skills and personalities but as a team we’ve proved unstoppable.

Q: Your releases show that you have a tight knit staff working with you. Did you anticipate the international success of your projects?

A: Not a clue. Steve Street who masters all the material is my brother in law. He was a studio engineer in the late 70′s and 80′s here in Bristol and recorded some of the material first time around. He later worked for Tears For Fears as their in house engineer at the Wool hall. Steve was in bands in the 80′s and believe it or not has made two Top Of The Pops appearances! We couldn’t run the label in the way that we do without Steve’s expertise and experience but also his unbelieveable commitment to quality.

Q: Mike, give thanks for bringing the Reggae gems of Bristol to the world. It has rekindled true recognition of original and authentic Roots Reggae Musik. Keep Jah Fire burning and sharing what this world needs!!

A: Thank you. The pleasure I’ve had in the project is delivering the finished cds and vinyl to the original artists and seeing them smile and be proud. First time around nothing much happened for them, now in 2012 and beyond they are all achieving their little slice of recognition and success.
Interview by Robert “Higherman” Heilman (October 2012) | Pics courtesy of Bristol Archive Records
(Please do not reproduce without permission) 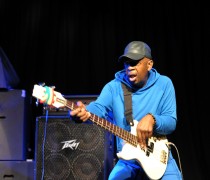